The African jungle has the lion, the Arctic has the polar bear. This fierce yet cuddly-looking creature dominates the icy wilderness at the top of the food chain. If visitors are lucky, they'll come across the polar bear on a cruise to the Arctic. Check out these facts you probably didn't know about the king of the ice:

1. The longest recorded nonstop swim a polar bear has ever made is 426 miles over nine days straight. Watch out Michael Phelps - that's equivalent to the distance between Washington, D.C., and Boston. During the swim, the female bear lost 22 percent of her body weight. Studies have predicted more long-distance swims are in polar bears' future due to the shrinking ice caps.

2. The Latin name for polar bears is "ursus maritimus," which means sea bear. In Inuit mythology, the polar bear is called Pihoqahiak, the "ever-wandering one."

3. Speaking of languages, the translations to the word(s) for "polar bear" are quite broad. Some of them include lord of the Arctic. Old man in the fur cloak.

4. Female polar bears typically give birth to twin cubs, which stay with her for more than two years until they can hunt and survive on their own. Females receive no help from their solitary male mates.

5. The average adult female weights about 570 pounds. However, when pregnant, they can reach weights as heavy as 1,100 pounds. A fully grown male weighs around 1,000 pounds.

7. These bears are one of the animals most affected by climate change, with the land literally melting beneath their paws.

8. Seals make up most of a polar bear's diet.

9. They are the world's largest land predator and biggest member of the bear family.

10. Their blubber gets up to four inches thick. Under their white fur - which is great camouflage - polar bears have black skin to better soak in the sun's warmth. Fur even grows on the bottom of their claws, which protects against cold surfaces.

11. Although most polar bears are born on land, they spend most of their time at sea. Two of the Arctic's most important habitats for them are the Beaufort and Chukchi seas.

12. Polar bears are the only type of bear considered a marine animal.

13. While polar bears look appealing, they are intense predators that rarely fear humans, which can make them dangerous.

14. These arctic kings have no natural enemies. 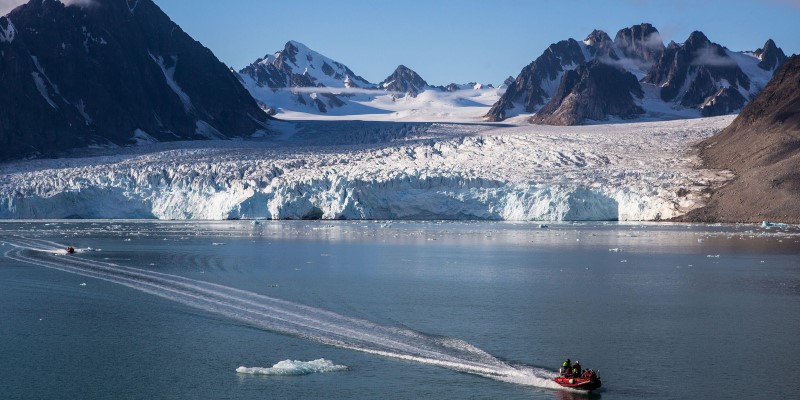