Every summer in Norway’s Arctic, a phenomenon occurs where the sun never sets below the horizon, even at midnight. Learn more about the Arctic summer daylight that can last up to four months.

After a long day, the sun approaches the horizon at around midnight. Still full of energy, you settle down to watch another day’s sunset. The evening light filters across the sea and bathes the deck in an otherworldly glow that you’ve seen many times before. You wait for the sun to dip out of sight, but it doesn’t. Once you’ve realised you’ve crossed the Arctic Circle, the sunset is interrupted by the dawn, and the sun begins to rise again.

Norway is well-known for its long summer days, but above the Arctic Circle, the days aren’t just long, they’re unending. As night falls over the rest of Norway, the sun lingers in Northern Norway, and it can be seen crossing the sky throughout the night. This atmospheric phenomenon has many names – “Polar Day”, “White Night”, “Nightless Night” – but the most common is “Midnight Sun”. 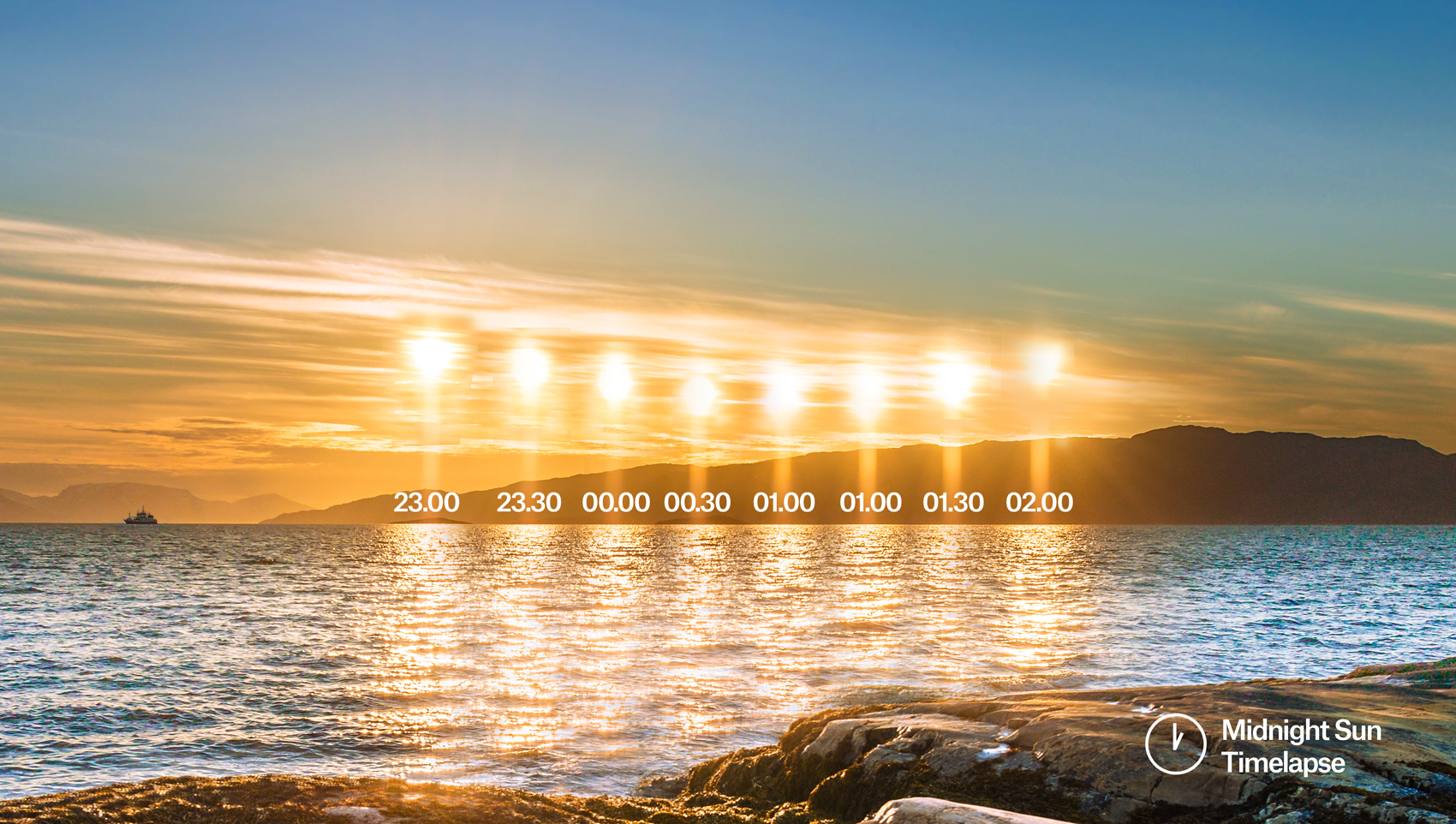 Where can you see the Midnight Sun?

During summer, you’ll find the Midnight Sun anywhere north of the Arctic Circle. This is the abstract geographic line that cuts through Sweden, Finland, Russia, Alaska, Canada, Greenland, Iceland*, and of course, the Land of the Midnight Sun itself, Norway.

This celestial event lasts longer the further north you go. In the Svalbard archipelago, Norway’s crown of islands in the High Arctic, the sun can be seen for 24 hours a day from late April to late August every year. This means that the locals enjoy just over four months of constant sunlight in the summer! Most parts of Norway that experience the Midnight Sun do so from May until the end of July.

*The Arctic Circle does not intersect the Icelandic mainland, but only Grimsey, located 41 kilometers north of the mainland.

You can see the Midnight Sun with us in quite a few places. During summer, our expedition cruises sail to Greenland and Norway, and we even attempt crossings of the fabled Northwest Passage. We also travel to Iceland experiencing white nights but not complete midnight sun six weeks of summer. The Antarctic Circle also gets its fair share of 24-hour sunlight. On a thrilling expedition to the bottom of the world, you can spend some time in Antarctica under the Midnight Sun. Read more

Why does the Midnight Sun occur?

As the Earth travels around the sun, we experience different seasons. Because the Earth also rotates on its own axis, we experience day and night. However, the Earth is tilted on its axis by 23.4 degrees, meaning that one hemisphere is always closer to the sun than the other. This is why we have opposite seasons in the northern and southern hemispheres.

During summer in the northern hemisphere, the North Pole is tilted towards the sun. As the Earth turns, the Polar region stays facing the sun, and the North Pole itself doesn’t experience darkness for six whole months. Arctic areas just south of the pole also experience the Midnight Sun, but for shorter lengths of time. The effect is diluted further south, and instead of the golden nights of the Arctic summer, places south of the Arctic Circle simply see longer days. Areas close to the equator experience very little change in daylight hours between the seasons. 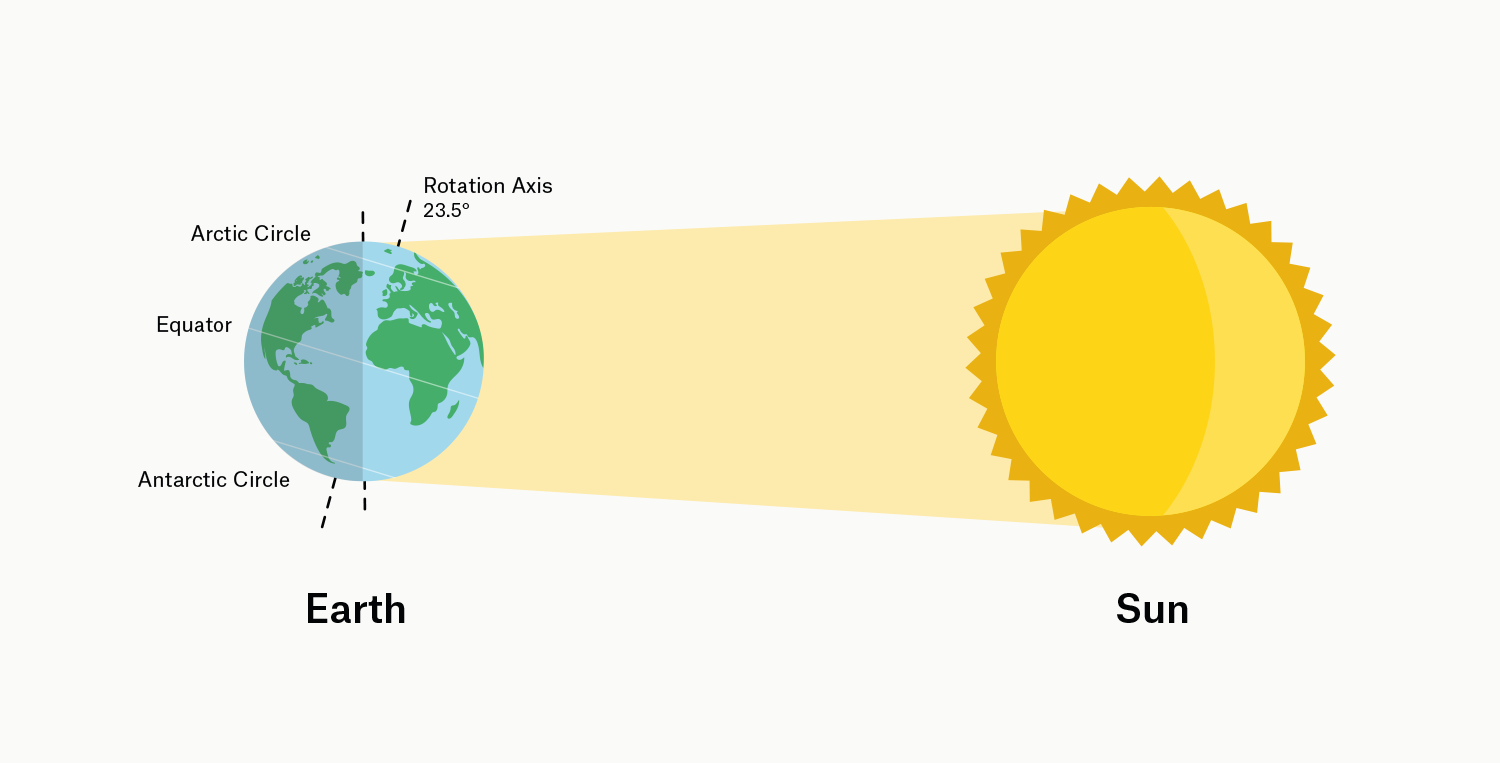 Once summer is over, the sun sets over the Polar region for the first time in months. This sunset will send the North Pole into six months of darkness, while other parts of the Arctic will experience both day and night for some months, before entering Polar Night during the winter.

What effect does the Midnight Sun have on people?

Like most living things, we’re strongly affected by the light from the sun. You’ve likely heard of circadian rhythms, which describe the various changes our bodies experience throughout the day. These rhythms are regulated by our body’s internal biological clock, which is influenced mainly by our genetics, but also by the light conditions around us. This is why we tend to feel alert during the day when it’s light, and sleepy at night when it’s dark. So what happens when it doesn’t get dark?

Many local Norwegians relish the endless sunlight and the energy boost they get from the Midnight Sun. In the spirit of friluftsliv (the quintessentially Norwegian love of the outdoors), they fill their days with outdoor activities, using the season to deepen their connection to nature. You might find these locals kayaking in the early hours of the morning, or hiking through the mountains late into the night, knowing the sun will always be there to light the way home.

When visiting the land of the Midnight Sun, you might start to lose track of time as one day melts into the next. The days take on a dreamy quality, and even those normally early to bed might find themselves chatting with fellow shipmates in the lounge far past midnight. No longer having to organise their routines around short periods of daylight, the locals are able to relax a little, and many will stay up well into the night. In Norway, summer is for socialising, and Norwegians make great use of the bright nights with barbecues and late-night drinks outdoors.

Top tips for making the most of the Midnight Sun

When sailing with us during the summer, you might be tempted to stay up late every night to bask in the glow of the Midnight Sun. However, you’ll likely have plenty of daytime activities and excursions planned too. Here are some tips to help you enjoy the Midnight Sun, while also getting enough rest to keep you alert during the day.

The light from the Midnight Sun is similar to the “golden hour”. This is the time just after sunrise or just before sunset, when photographers rush out to make use of the perfect natural lighting. Like all shooting conditions, this kind of lighting has its own set of unique challenges, but if overcome or worked around, it can help you create some stunning shots.

Of course, photography is art, and the Midnight Sun provides the perfect light for surreal and atmospheric shots. So play around with different settings and tools, and have fun seeing what you can create!